Happy holidays from United Neighborhoods for Reform, whose green grass roots keep on growing. Thank you to Tribune reporter Jim Redden for following the progress in capturing City Council's attention (a favorite line from the recap of the Dec. 17 City Hall event: "The presentation all but hijacked the original purpose of the hearing").

For those still undecided about demos, read a recent op-ed by planner, architect, and writer (and United Neighborhoods for Reform member) Jack Bookwalter detailing "Six myths about Portland demolitions."
Posted by margaret at 2:26 PM No comments:

There was so much to say, we'll go back in February

Council showed interest in United Neighborhoods for Reform's proposals in the demolition/development resolution, in both demolition practice(s) and forward-thinking ways, hinting at the possibility for improved new development. At least they hit the pause button on recommendations from the Development Review Advisory Committee to take a longer, bigger look at demolition and development issues that impact everyone.

If you missed attending the hearing, you can watch the video here; the United Neighborhoods for Reform presentation starts at about 162:45.

Thank you to all who've supported the cause so far. We hope you'll attend our City Hall session Part II, set for 2 p.m. Thursday, Feb. 12.


In the meantime, watch the movie that Fred Lifton made for the effort, which debuted today at City Hall and clearly shows what neighborhoods give and get in these heavy demo days.
Posted by margaret at 12:05 AM No comments: 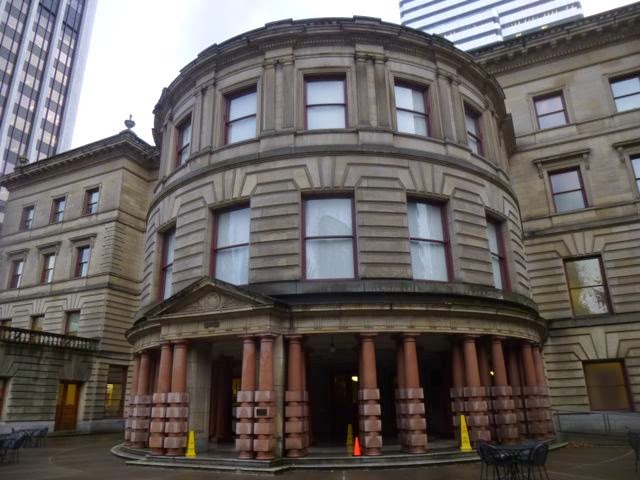 As East Columbia and South Burlingame add their support to the demolition/development resolution, United Neighborhoods for Reform prepares to present its ideas for saving affordable housing and improving new construction in Portland at City Hall (right) this Wednesday.

The Details
What: United Neighborhoods for Reform presents its demolition/development resolution and responds to recommendations proposed by the Development Review Advisory Committee, or DRAC
When: 3:30 p.m. Wednesday, Dec. 17
Where: Portland City Hall, 1221 S.W. Fourth, Council Chambers
Why: So we can save affordable housing, see more beneficial development, and—


By the way, the DRAC recommendations, already a mixed bag, not only call for reduction of the optional 120-day delay to 30 days (it's hard enough trying to buy a house as an individual in that amount of time, much less marshal a neighborhood effort), but they propose requiring that an extension request be signed by both the requester and the property owner or the owner's agent. That's another big change to a bit of code that's been on the books for 25 years and has actually saved houses, per its intent.

Given how few of the developers combing Portland are based in Portland or live in Portland, can you imagine how easy it would be tracking them down to sign a request for a demo delay they probably don't want to honor?

If that signature can't be procured in a timely manner, the proposed added language to code is clear on what happens: "If the request for the extension is not signed by the property owner or the property owner’s agent, no extension will be granted."

We hope you'll make it to City Hall on Wednesday to show support for the neighbor voice in development decisions that affect us all.
Posted by margaret at 12:30 AM No comments:

Now that Arbor Lodge is in the right place on the map, here's an update

Posted by margaret at 1:43 PM No comments:

The resolution rolls toward City Hall

Maplewood, South Portland, and Richmond have endorsed the demolition/development resolution. This last vote of support brings to mind last summer's community walks conducted by the Bureau of Planning. (I'll add back the "and Sustainability" when Portland stops wasting old-growth homes.)

Neighbors at the Richmond event almost wanted to mutiny. "We don't need to go on any walk," one neighbor shouted. "We can settle this right here." City planner Barry Manning managed to keep things on track. Hopefully, some of those same neighbors turned out last night at Richmond's meeting to show their support for more thoughtful planning and development that benefits all.

There's a lengthy writeup on the resolution at BikePortland.org, just wishing "density" never made it in the headline. United Neighborhoods for Reform takes no position on density. It only aims to maintain our stock of affordable housing, and to encourage more positive development in the neighborhoods.
Posted by margaret at 1:01 PM No comments:

Three more neighborhood associations support the demolition/development resolution. If your neighborhood does not appear in the list at top right, there's still time to have it consider, discuss, and vote on the resolution before presentation at City Council in mid-December.
Posted by margaret at 6:34 PM No comments:

Grant Park and Centennial have joined the group of neighborhoods that support making neighbors' voice part of the discussion in planning Portland's future.

Meanwhile, stories chronicling development in Houston, Nashville, and San Francisco show what could happen here if business continues as usual.

Some quotes from the first article, by Anis Shivani:


"When existing vibrant neighborhoods are torn down and those being displaced are crucial members of the community, we’re not just talking about gentrification. We are witnessing a full-scale sellout to developers, who are working closely with municipal government for short-term speculative gain."

"This is how ruling oligarchies kill a city: one business, one person at a time, pretending that market forces are doing all the work, when in fact all sorts of incentives and disincentives are at play. ... [N]ot a day has gone by in recent years when [Houston real estate website] Swamplot hasn’t reported the closure of yet another historic restaurant or bar or antique shop. But after about five years of this, there’s nothing distinctive to shut down anymore." This will sound familiar and scarily prophetic to those involved in Portland's music scene.

"Incentives should be provided to increase livability and expand the range of options for every class of people. Instead, [some] neighborhoods remain static and ignored [East Portland comes to mind], while the mega-developers keep tearing down and rebuilding the stock of inner-city housing that is already solid. The logic of gentrification is to continuously package and commodify and leverage the same bit of land for speculative purposes. Save the neighborhoods that need to be saved and leave those that are doing great alone."