Let's do talk about "housing choices"

It's clever, the PR campaign to tout "housing choices" to push a developer-driven agenda to rezone much of the city for teardown development. The only "housing choices" that tend to present themselves after demolition of old-growth construction tend to be the plex, as many units as can be crammed into a maximum-size envelope: 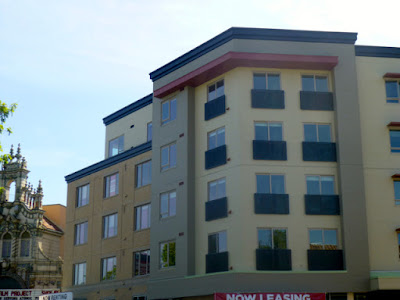 or the manse, a many-thousands-of-square-feet lot sprawler that permanently casts neighbors in shadow (1920s home at right shown for scale): 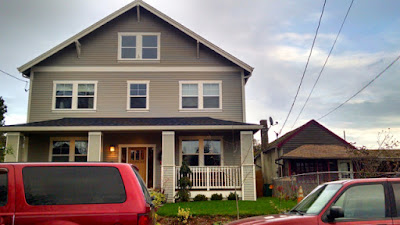 What'll it be—the plex or the manse? If you wanted, say, a modest bungalow built with care and of durable materials, those are becoming very hard to find. Just last year, Portland lost almost 400 of this type of home—unique units of housing with character, history, and generally good bones that would reward the TLC and sweat equity of any invested resident.

As Portlanders show increasing concern about the effects of rampant demolitions, and newcomers are faced with the nonchoice of expensive apartment versus expensive home, let's think about those hundreds of homes that went to the landfill, almost always more affordable than new construction and offering a toehold in the real estate market for those looking to make a long-term stake in their future here.

Those homes are hundreds of housing choices nobody got to make. Instead, the question remains: plex or manse? Every demolition narrows the in-between.

As if maintaining Portland's resource of well-built affordable housing wasn't enough of a goal in itself, there's also this for those building or considering new construction:

Posted by margaret at 9:28 PM No comments: