As our once fiercely independent city got ready to RIP, Portland planners worked to ensure speculators could get the real estate deals of the century under the radical upzoning of the Residential Infill Project (that's yer RIP). Read the details and visit a scalable version of the suppressed map here.

As suspected, the most profitable places tagged for redevelopment generally are the ones where lower-income people and renters live.

More and more the truth of RIP bubbles to the fore.

Posted by margaret at 2:35 PM No comments:

Save the date—June 3! Sign up by June 2 to testify from your keyboard in defense of existing affordable housing

After postponing the RIP hearing March 12, the same day the mayor put COVID-19 restrictions into effect, Wheeler resumes his push for the Residential Infill Project, this time in a City Council online hearing set for 2 p.m. Wednesday, June 3.

However! You must sign up to testify by 4 p.m. Tuesday, June 2! Now's your chance to give our leaders a three-minute view of the avoidable outsize impacts of RIP; the deeper, uh, profitability bonus (at least the city's RIP announcement puts "Deeper Affordability Bonus" in quotes--'cause who we kidding); the laughable "limits" on McMansions (assuming they are unchanged from excepting the square footage of "basements" and "attics" generously interpreted); and so on.

Other methods to testify per the Bureau of Planning:

Wanna save Portland? Well, then, get activated! 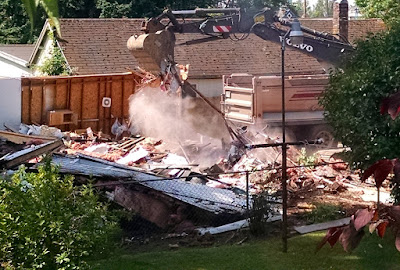 Years in the making, the Residential Infill Project comes soon to City Council. A commissioner's staff member has said that the only way to stop or mitigate this destructive proposal is to show up en masse or at least send in testimony to the council. Stay tuned for the date to appear and make a difference. For more info, read on.

United Neighborhoods for Reform (UNR) Call to Action –  RIP Testimony
Call to Action
Ø  City Council will hold another hearing on the Residential Infill Project.
Ø  This may be the final opportunity for us to submit our opinions about RIP.  Even if you only have time to write a single paragraph for your testimony, please do it!
Ø  Submit your testimony online:
o   It doesn’t have to be long. Begin with “I oppose RIP” and keep it short and simple
o   https://www.portlandmaps.com/bps/mapapp/maps.html#mapTheme=rip
Ø  Please email the Commissioners directly in addition to submitting your testimony on the MapApp.  They don’t always read the testimonies on the MapApp.
MayorWheeler@portlandoregon.gov
JoAnn@portlandoregon.gov
Chloe@portlandoregon.gov
Amanda@portlandoregon.gov
Overview:
Ø  The focus for this hearing will be on proposed amendments to RIP.  The specific amendments can be seen at this link:
o   https://beta.portland.gov/bps/rip/residential-infill-project-documents
o   Scroll down that webpage to the section titled: “Amendment Packages for Council’s March 12 Hearing”.  You may testify on any or all of the amendments, but this email from UNR focuses only on Amendment #6.
Amendment #6:
With each iteration of the Bureau of Planning and Sustainability’s Residential Infill Project (RIP) proposals, the potential impacts on Portland neighborhoods have increased.
Ø  Amendment #6 would allow a building with up to six units on all R2.5, R5 and R7 residential single family zoned lots if at least half of the units (so three units if the building is a six plex) are affordable as rentals to those earnings not more than 60% of Mean Family Income (MFI).
Ø  The amendment would allow additional floor area ratio (FAR) for these ‘multi-dwelling structures”.  Under the proposed amendment, the following sizes would be allowed for these buildings:
o   3200 square feet in the R2.5 Zone
o   4500 square feet in the R5 Zone
o   6000 square feet in the R7 Zone
Ø  Amendment #6 would also grant an additional height bonus of 5 feet in the R5 and R7 zones which means buildings could be 35 feet tall.
Ø  Data from the City of Portland shows the median Portland house is 1500 square feet and 15 feet tall (to the midpoint of the roof pitch).  The multi-dwelling structures allowed under Amendment #6 would be grossly out of scale in almost all Portland neighborhoods.
Ø  One of the goals of the original Residential Infill Project was to modify building codes so the scale of new construction would fit in better with existing homes in a neighborhood.  In the five years since this project began, each iteration of RIP has become more removed from achieving this goal.  Amendment #6 takes us ever further from the goal of changing city code to create compatible infill.
Ø  Furthermore there is nothing in RIP or in Amendment #6 that would require or even encourage the higher density units to be located near frequent transit.
o   The 2035 Comprehensive Plan directs us to focus density around centers and transportation hubs.
o   Instead of well-planned increases in density directed by the Comprehensive Plan, RIP ignores the Comp Plan by allowing random density throughout the residential neighborhoods, without consideration of infrastructure needs, including parking.
o   A better plan would be for the City to focus the levels of Middle Housing around town centers and transportation corridors with frequent (every 15 minutes), reliable and safe public transit.
Ø  Amendment #6 is likely to result in more demolitions; BPS has not analyzed the demolition risks associated with this amendment.
Ø  Finally, while BPS acknowledges there is a displacement risk with RIP, they have no proposal to mitigate this displacement. The City should wait to pass RIP until it has a serious anti-displacement plan in place. This plan would need to have long term funding and a tracking system to determine if is effective.
Other Resources:
Ø  Check out this new website created by a Southeast Portland neighbor:
o   https://stoprippdx.org/
Ø  Sign up for email updates from BPS to stay informed about RIP:
https://beta.portland.gov/bps/rip/stay-informed-about-residential-infill-project
Posted by margaret at 5:43 PM No comments: